The story of Old Prieuré... 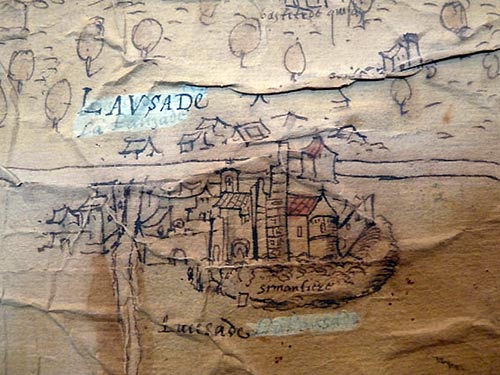 HISTORY of the PRIORESS and the SEIGNIORY CLERGYMAN of the LAUZADE,

Commune of the LUC in PROVENCE, VAR,

by Mr. BAUDOIN,
correspondent of the SCIENTIFIC SURVEY FIRM AND ARCHEOLOGIQUES OF the VAR,
Year 1958.

- in 1128, Amélius, witness with the donation of the castrum made by Raymond Berenger with the canons of Pignans;
- from 1130 to 1440, Raymond, got the confirmation of this donation by the son of Raymond Berenger;
- from 1190 to 1208, Lèger, witness with a new confirmation made by Alphonse king d' Aragon, count de Provence, grandson of Raymond Berenger;
- in 1239, Jean de Condamine, witness with the ceremony of homage-liege returned in Aix, in the St-Jean church, February 21 of the same year, with the count de Provence, by 15 archbishops, bishops or provosts;
- in 1246, Hugues of the Tower;
- in 1415, Jean Dragonis;
- in 1442, Jacques of Puget and,
- in 1464, Guillaume de Pontevès.
Lastly, in 1486, the prévot of Pignans, Julien of Rovère, then Mignon vice-legate, joins together the priory of Lauzade in the chapter of the Collegial one. From this day, there was not any more particular prior; the spiritual jurisdiction, as well as the incomes, belonged to the Chapter which took care of the religious service.
However, in;1501, we still find a prior special in Lauzade: it is Antoine Filholi, born in the Luc, who became, successively, bishop of Sisteron, archbishop of Aix and died, in 1541, in this city, 102 years old. During the wars of religion which afflicted Provence, especially at the end of the XVIth century, Lauzade had to suffer much. We suppose that the village was, at that time, momentarily deserted and the exercise from the worship, in the parish suspended because, according to Girardin, the inhabitants took refuge, left with the Luc, part with Gonfaron. This abandonment was preceded, specifies the Papon historian, of a combat violent and baited between Razats and Carcistes in the plain that the two communes are divided and whose Lauzade occupies the Western edge. One sees, according to the public acts of this dark period, in which state the priory and the church were reduced. In the official report of the pastoral visit of April 27, 1582, the bishop of Frejus notes that the church does not contain any more that 3 rétables or furnace bridges of which only one is covered with its tablecloths, and which one finds there dice extremely old baptismal font. It prescribes to celebrate the mass there every Sunday and feastdays